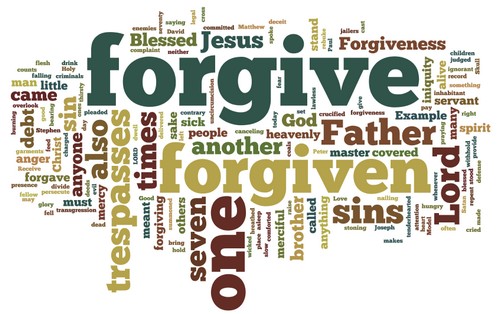 I love what the Bible says on forgiveness. These Bible verses about Forgiveness are selected from the ESV Bible. May God bless his Word.

Jesus Is Our Model Of Forgiveness

Luke 23:33-34 ESV And when they came to the place that is called The Skull, there they crucified him, and the criminals, one on his right and one on his left. (34) And Jesus said, “Father, forgive them, for they know not what they do.” And they cast lots to divide his garments.

Mark 11:25 ESV And whenever you stand praying, forgive, if you have anything against anyone, so that your Father also who is in heaven may forgive you your trespasses.”

Matthew 18:21-22 ESV Then Peter came up and said to him, “Lord, how often will my brother sin against me, and I forgive him? As many as seven times?” (22) Jesus said to him, “I do not say to you seven times, but seventy times seven.

Matthew 5:44 ESV But I say to you, Love your enemies and pray for those who persecute you,

Because God Has Forgiven Us, We Must Forgive Others

Ephesians 4:32 ESV Be kind to one another, tenderhearted, forgiving one another, as God in Christ forgave you.

Colossians 3:13 ESV bearing with one another and, if one has a complaint against another, forgiving each other; as the Lord has forgiven you, so you also must forgive.

Proverbs 19:11 ESV Good sense makes one slow to anger, and it is his glory to overlook an offense.

Romans 12:20 ESV To the contrary, “if your enemy is hungry, feed him; if he is thirsty, give him something to drink; for by so doing you will heap burning coals on his head.”

Matthew 18:32-35 ESV Then his master summoned him and said to him, ‘You wicked servant! I forgave you all that debt because you pleaded with me. (33) And should not you have had mercy on your fellow servant, as I had mercy on you?’ (34) And in anger his master delivered him to the jailers, until he should pay all his debt. (35) So also my heavenly Father will do to every one of you, if you do not forgive your brother from your heart.”

Stephen Was An Example Of Forgiveness

Acts 7:59-60 ESV And as they were stoning Stephen, he called out, “Lord Jesus, receive my spirit.” (60) And falling to his knees he cried out with a loud voice, “Lord, do not hold this sin against them.” And when he had said this, he fell asleep.

Paul Was An Example Of Forgiveness

2 Timothy 4:16 ESV At my first defense no one came to stand by me, but all deserted me. May it not be charged against them!

Joseph Was An Example Of Forgiveness

Genesis 50:20-21 ESV As for you, you meant evil against me, but God meant it for good, to bring it about that many people should be kept alive, as they are today. (21) So do not fear; I will provide for you and your little ones.” Thus he comforted them and spoke kindly to them.

James 5:15 ESV And the prayer of faith will save the one who is sick, and the Lord will raise him up. And if he has committed sins, he will be forgiven.

Colossians 2:13-14 ESV And you, who were dead in your trespasses and the uncircumcision of your flesh, God made alive together with him, having forgiven us all our trespasses, (14) by canceling the record of debt that stood against us with its legal demands. This he set aside, nailing it to the cross.

2 Corinthians 2:10-11 ESV Anyone whom you forgive, I also forgive. What I have forgiven, if I have forgiven anything, has been for your sake in the presence of Christ, (11) so that we would not be outwitted by Satan; for we are not ignorant of his designs.

Romans 4:7-8 ESV “Blessed are those whose lawless deeds are forgiven, and whose sins are covered; (8) blessed is the man against whom the Lord will not count his sin.”

John 20:22-23 ESV And when he had said this, he breathed on them and said to them, “Receive the Holy Spirit. (23) If you forgive the sins of anyone, they are forgiven; if you withhold forgiveness from anyone, it is withheld.”

1 John 2:12 ESV I am writing to you, little children, because your sins are forgiven for his name’s sake.

The Psalms have many helpful Bible verses about forgiveness.

Psalms 32:1-2 ESV A Maskil of David. Blessed is the one whose transgression is forgiven, whose sin is covered. (2) Blessed is the man against whom the LORD counts no iniquity, and in whose spirit there is no deceit.

Isaiah 33:24 ESV And no inhabitant will say, “I am sick”; the people who dwell there will be forgiven their iniquity.

1 thought on “Bible Verses about Forgiveness”