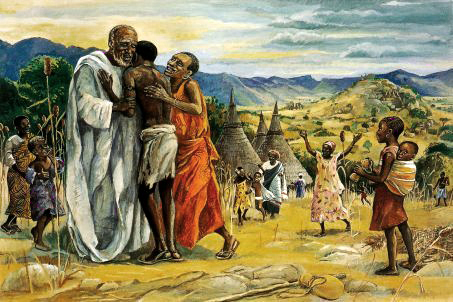 The Parable of the Prodigal Son is one of the most well-known stories in the Bible. It is a story about a young man who leaves his father and squanders all of his money. When he realizes his mistake, he returns to his father, who welcomes him with open arms. This story is often used as a metaphor for God’s forgiveness and love. In this devotional, we will focus on the father in this story – the gracious man who represents God Himself.

The Parable of the Prodigal Son is found in the Gospel of Luke, chapter 15.

The story begins with a young man leaving his father’s house and squandering his inheritance. After he has spent all of his money, he finds himself in a foreign country, working as a swineherd. He is so desperate that he even considered eating the food that was meant for the pigs. However, he finally comes to his senses and realizes that he has made a huge mistake. He decides to return to his father and ask for forgiveness.

When the young man returns, his father is overjoyed to see him. He welcomes him with open arms and throws a big party to celebrate his return. This story is often used as an example of God’s love and forgiveness.

When we think of the Prodigal Son, we often focus on the son’s sin and his repentance.

However, the father in this story is just as important. He is a representation of God’s grace and forgiveness. Just as the father welcomed his son back with open arms, God welcomes us back when we repent of our sins. He is always ready to forgive us and take us back into His family.

If you are a parent, this story should be a reminder of God’s love for you. Just as the father in the story forgave his son, God will always forgive you, no matter what you have done. He loves you unconditionally and wants nothing more than for you to come back to Him. If you are struggling with forgiveness, know that God is always ready to help you through it. Trust in His grace and mercy, and He will work everything out for your good.

Conclude Your Devotional Time with Prayer

Thank You for Your forgiveness. Thank You for always being ready to forgive us, no matter what we have done. Thank You for Your love and grace, which are so abundant and never-ending. We praise You for always being there for us, no matter what. We thank You for the Prodigal Son story and for the reminder that You are always ready to forgive us and take us back into Your family. We pray for parents who are struggling with forgiveness. May they trust in Your grace and mercy, knowing that You will work everything out for their good. In Jesus’ name we pray, Amen.

The Parable of the Prodigal Son Message Paraphrase of the Bible

Luke 15:11-32 MSG  Then he said, “There was once a man who had two sons.  (12)  The younger said to his father, ‘Father, I want right now what’s coming to me.’ “So the father divided the property between them.  (13)  It wasn’t long before the younger son packed his bags and left for a distant country. There, undisciplined and dissipated, he wasted everything he had.  (14)  After he had gone through all his money, there was a bad famine all through that country and he began to hurt.  (15)  He signed on with a citizen there who assigned him to his fields to slop the pigs.  (16)  He was so hungry he would have eaten the corncobs in the pig slop, but no one would give him any.  (17)  “That brought him to his senses. He said, ‘All those farmhands working for my father sit down to three meals a day, and here I am starving to death.  (18)  I’m going back to my father. I’ll say to him, Father, I’ve sinned against God, I’ve sinned before you;  (19)  I don’t deserve to be called your son. Take me on as a hired hand.’  (20)  He got right up and went home to his father. “When he was still a long way off, his father saw him. His heart pounding, he ran out, embraced him, and kissed him.  (21)  The son started his speech: ‘Father, I’ve sinned against God, I’ve sinned before you; I don’t deserve to be called your son ever again.’  (22)  “But the father wasn’t listening. He was calling to the servants, ‘Quick. Bring a clean set of clothes and dress him. Put the family ring on his finger and sandals on his feet.  (23)  Then get a grain-fed heifer and roast it. We’re going to feast! We’re going to have a wonderful time!  (24)  My son is here—given up for dead and now alive! Given up for lost and now found!’ And they began to have a wonderful time.  (25)  “All this time his older son was out in the field. When the day’s work was done he came in. As he approached the house, he heard the music and dancing.  (26)  Calling over one of the houseboys, he asked what was going on.  (27)  He told him, ‘Your brother came home. Your father has ordered a feast—barbecued beef!—because he has him home safe and sound.’  (28)  “The older brother stalked off in an angry sulk and refused to join in. His father came out and tried to talk to him, but he wouldn’t listen.  (29)  The son said, ‘Look how many years I’ve stayed here serving you, never giving you one moment of grief, but have you ever thrown a party for me and my friends?  (30)  Then this son of yours who has thrown away your money on whores shows up and you go all out with a feast!’  (31)  “His father said, ‘Son, you don’t understand. You’re with me all the time, and everything that is mine is yours—  (32)  but this is a wonderful time, and we had to celebrate. This brother of yours was dead, and he’s alive! He was lost, and he’s found!'”

The Parable of Prodigal Son KJV

Luke 15:11-32 KJV  And he said, A certain man had two sons:  (12)  And the younger of them said to his father, Father, give me the portion of goods that falleth to me. And he divided unto them his living.  (13)  And not many days after the younger son gathered all together, and took his journey into a far country, and there wasted his substance with riotous living.  (14)  And when he had spent all, there arose a mighty famine in that land; and he began to be in want.  (15)  And he went and joined himself to a citizen of that country; and he sent him into his fields to feed swine.  (16)  And he would fain have filled his belly with the husks that the swine did eat: and no man gave unto him.  (17)  And when he came to himself, he said, How many hired servants of my father’s have bread enough and to spare, and I perish with hunger!  (18)  I will arise and go to my father, and will say unto him, Father, I have sinned against heaven, and before thee,  (19)  And am no more worthy to be called thy son: make me as one of thy hired servants.  (20)  And he arose, and came to his father. But when he was yet a great way off, his father saw him, and had compassion, and ran, and fell on his neck, and kissed him.  (21)  And the son said unto him, Father, I have sinned against heaven, and in thy sight, and am no more worthy to be called thy son.  (22)  But the father said to his servants, Bring forth the best robe, and put it on him; and put a ring on his hand, and shoes on his feet:  (23)  And bring hither the fatted calf, and kill it; and let us eat, and be merry:  (24)  For this my son was dead, and is alive again; he was lost, and is found. And they began to be merry.  (25)  Now his elder son was in the field: and as he came and drew nigh to the house, he heard musick and dancing.  (26)  And he called one of the servants, and asked what these things meant.  (27)  And he said unto him, Thy brother is come; and thy father hath killed the fatted calf, because he hath received him safe and sound.  (28)  And he was angry, and would not go in: therefore came his father out, and intreated him.  (29)  And he answering said to his father, Lo, these many years do I serve thee, neither transgressed I at any time thy commandment: and yet thou never gavest me a kid, that I might make merry with my friends:  (30)  But as soon as this thy son was come, which hath devoured thy living with harlots, thou hast killed for him the fatted calf.  (31)  And he said unto him, Son, thou art ever with me, and all that I have is thine.  (32)  It was meet that we should make merry, and be glad: for this thy brother was dead, and is alive again; and was lost, and is found.